Bartłomiej Derski
02.05.2020
Lubię to
Coal production in Poland has been declining for 40 years. Meanwhile, all government forecasts have assumed the decrease could be stopped, but each turned out to be overestimated. It is only a document, published four months ago, which assumes severe coal production decline, and it is also... very likely to be far too optimistic.

According to the government forecast of the year 1984, Polish coal mines were to produce 195 mln of coal in 2000. Sixteen years later it turned out that the governmental planners had been mistaken by… almost 50 percent. In reality, coal production amounted to 102 mln tonnes. Such giantic mistake can obviously be explained by political and economic transformation, however, in reality coal production in Poland had already been declining since 1979 (reaching its record-breaking value 201 mln tonnes), but coal mining experts and party activists just assumed this drop would come into a sudden halt and Polish unprofitable coal mines would thrive happily ever after.

Next estimate, prepared during “Solidarity” government, was even more optimistic. In its upper scenario, drawn in 1990 by the Ministry of Industry, the production was expected to increase from 147 mln tonnes at that time to 162 mln tonnes in 2010. The worst scenario outlined the domestic coal production to remain at least at similar level. In reality, the government once again was mistaken by… almost 50 percent. The coal production declined to 76 mln tonnes.

In 2000, outlining Polish energy policy, the Ministry of Economy in its “survival scenario” assumed that coal production would decline only by 18 percent in the subsequent 20 years and we would still be producing 84 mln tonnes of coal in Poland in 2020.

Four years later, while Poland was joining the European Union, the Ministry of Economy and Labour was even more detached from economic reality, as it outlined the production drop to be less than it had previously been estimated. According to the forecast prepared sixteeen years ago, this year we should produce 89 mln tonnes of coal. However, already in 2019 the coal production in Poland was only 61.5 mln tonnes and, according to estimates of WysokieNapiecie.pl portal, it is going to decrease below 60 mln tonnes in 2020, i.e. to the lowest level since 1947. 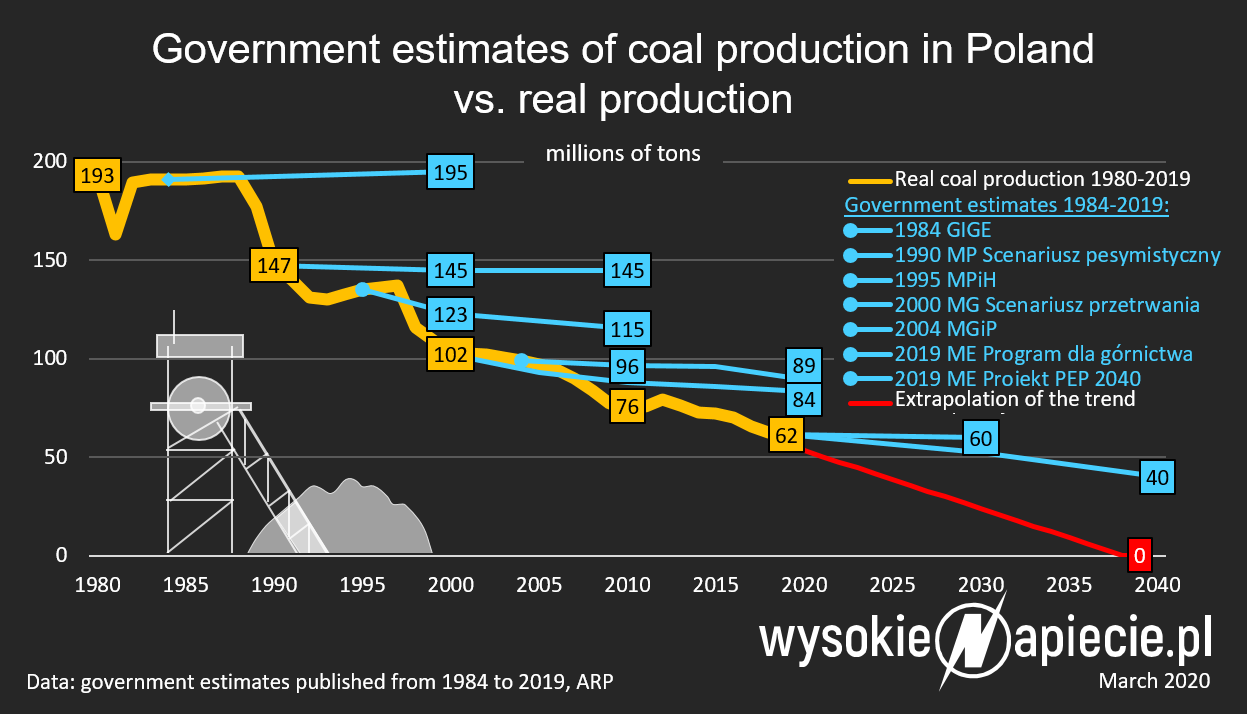 The present government of the Prime Minister Mateusz Morawiecki also seems to be cut off from reality like its predecessors – from PZPR, through governments of “Solidarity” , SLD-PSL, PiS-Samoobrona-LPR and to PO-PSL. In 2018 the coal production outline was adopted. It was updated six months ago. In its forecasts it once again estimates putting a definite stop to further coal production decline and mining of “over 20 mln of tonnes” of coal in 20 years.

The latest project of Polish energy policy until 2040 becomes the first governmental forecast in the Polish history which estimates significant coal production decline. Published in November “Conclusions from estimate analyses for fuel & power industry” assumed that in the next 20 years coal production would decline by 35 percent, i.e. by over 20 mln tonnes and in 2040 it would be 40 mln tonnes.

However, also this forecast might seem too optimistic. Simple extrapolation of the declining trend for the last 30 years implicates production of the very last coal tonne in Poland in 2040, unless some extraordinary circumstancess occur. Adopting even longer 40 years trend of the years 1979-2019 would mean closing of this industry in Poland a few years earlier.

Such direct extrapolation does not obviously consider the simple fact that Poland produces approximately 12mln tonnes of coking coal and it has remained at the constant level (+/- 1 mln t/year), as the demand for this raw material does not decline. The total production downturn is represented by thermal coal, being the fuel for power plants and heating of residential buildings. It seems very likely we will need coal for coke production far longer than the coal for burning in boilers. Thus, several coal mines of JSW, after multi-million investments, will be able to produce coal even after 2040, however this might be threatened by studies on coke replacement in metallurgy. Moreover, the coal production prospect exceeding this time limit may also be feasible for 2 or 3 thermal coal mines.

Rough estimates of total coal production outline its likely decline to 10-20mln of tonnes in 2040, instead of up to 40 mln tonnes, as having been estimated by the government. It seems very likely that the last tonne of coal from Polish mine will have been produced by mid 21st century.

Ultimately, it will not be a bad outcome as, at this time, we are going to be the last European Union member state, and one of the last in Europe, just to be completing its coal mining. Austria finished its coal production already in 1965, the Netherlands in 1976, Ireland in 1990, Hungary, Belgium and Sweden in 1992, Croatia in1999, Romania in 2003, France and Serbia in 2004, Bulgaria in 2013, Italy in 2015, and Germany and Spain in 2018. Coal production is coming to an end also in Czech Republic, Norway, Great Britain and Ukraine, so in all – apart from Russia with its vast Siberian resources – European states.

In all Europe, apart from Russia, coal production has become unprofitable

In all this countries the reason was the same – uprofitability of further production. To be more precise, it usually meant lack of money or political will for further subsidies of unprofitable mining, as in the majority of states, from Norway through Great Britain, France and Germany to Spain, the mines became unprofitable long before their closure. Tax payers in all these countries subsidized coal production due to political and social reasons. For example, in France and Germany it was a part of 10-year coal production shutdown  schedules, encompassing exact deadlines for individual coal mines closures, so that both miners and whole communities could plan their “after coal age” future.

In Poland the coal mining elimination takes place exactly due to the same reasons, however it is performed in erratic manner. Also here, the production has become unprofitable, and the increase of coal price on global markets every several years only covers it up. Meanwhile, instead of accumulating capital for investments, the coal mines, remaining under government control and influenced by labour unions, are far too generous with donating awards and pay increases to their employees.

Coal mining regions in need for transformation not for production promises

Instead by investments, production profitability improvement, has been implemented by means of closing less profitable coal mines (and here again, due to political conditions, not always the weakest ones) every few years. The situation will have remained unchanged in Poland by 2020 or 2021 at the latest, as Polska Grupa Górnicza, despite its loss, has just granted the money for 14th month salaries and remuneration increase by 6 percent, whilst Tauron Wydobycie, after politically driven takeover of Brzeszcze mine, has been dragging all Katowice power company down. Today, Polish coal mining is again generating loss in spite of selling coal at a highest price for many years, far above global markets’ coal price.

Read also: Analysis of the special legislative act for the offshore winds farms in Poland

Nevertheless, Polish mines are soon to face the problem of growing reserves, which can be released only by loss generating coal export, as well as the difficulties connected with expiring contracts with power industry. The latter will insist on price reduction, as it itself remains under profound pressure – political: due to growing energy prices – and economic: caused by increased import of far cheaper electricity from abroad.

The government should finally face the problem and stop its wishful thinking by abandoning forecasts which are as unlikely to be fulfilled as the all coal production estimates for the past forty years. Instead of promising “coal production for 200 years”, politicians should commit to far more industrious activity – scheduling transformation of coal mining towns in Upper Silesia and western Malopolska in order to prevent them from degradation as it was the case in Wałbrzych or Bytom. It is an extremely urgent matter because coal production closing will soon be overlapped by closing of lignite production, hence towns such as Bełchatów, Konin or Turek, depending on this raw material, will find themselves in even worse position than the ones from industrialized south region of Poland.

26.11.2018 • Bartłomiej Derski
Polish government: wind turbines will be scrapped within 17 years
26.02.2021 • Magdalena Skłodowska
Pompy ciepła trafiają pod polskie strzechy
02.05.2020 • Bartłomiej Derski
Coal production in Poland closer to the end than claimed by politicians
31.01.2020 • Bartłomiej Derski
Electricity production in Poland lowest in a decade. The smallest share of coal in history
Bartłomiej Derski
31.01.2020
Lubię to
In 2019, the share of coal in the Polish energy mix fell to the lowest level in history. However, it still belongs to the highest in the world. The place of "black gold" is filled mainly with import and of electricity generated from gas and renewable sources. And all this with a decrease in demand and production.
Zielone technologie rozwijają:
Rynek energii wspiera:
Lubię to

26.11.2018 • Bartłomiej Derski
Polish government: wind turbines will be scrapped within 17 years
26.02.2021 • Magdalena Skłodowska
Pompy ciepła trafiają pod polskie strzechy
02.05.2020 • Bartłomiej Derski
Coal production in Poland closer to the end than claimed by politicians
31.01.2020 • Bartłomiej Derski
Electricity production in Poland lowest in a decade. The smallest share of coal in history
Jakub Dąbrowski
20.01.2020
Lubię to
On 15 January 2020, the Polish Government published the draft Promotion of the Electricity Generation in the Offshore Wind Farms Act (the “Draft Act”). Adoption of legislation dedicated to offshore wind farms is crucial for development of the energy sector in Poland, which is in the process of difficult but essential transformation from the coal-based to RES-based system. The Government expects the energy from the offshore wind farms to play key a role in that transformation.
Lubię to