The first wind farms in Poland without subsidies

Increasing prices of electricity and decreasing costs of "green" technologies have contributed to launching two wind farms in Poland without government support. This is a complete reversal of roles, as from next year subsidies for coal-fired power plants will be added to the electricity bill.

Wind farm with capacity of  11 MW  will be built near Gdańsk, whose only source of revenue will be a ten-year (to start with) electricity sales contract for Kompania Piwowarska (Tyskie, Lech and Żubr beers). "This is the first contract in Poland for the purchase of energy from a wind farm of which the expansion will not be subsidized by government funding," stated by Innogy in a  communiqué published on 5th of November 2019.

On the same day, Polenergia, controlled by Dominika Kulczyk, announced  start of the construction of a 38 MW wind farm on a completely market terms, without subsidies, or even a long-term contract for the sale of electricity.

These are two landmark decisions on the Polish market. What has happened is what has been happening in Western Europe for several years. "Green" energy production technologies turned out to be cheaper not only than new coal, gas or nuclear power plants, but also competitive in relation to market electricity prices.

Both projects have some advantages over many other wind farms in Poland, but they are by no means the only ones whose construction is already planned without any subsidies

Contract with a global electricity partner for Polish breweries

The investment implemented by Innogy is an extension of the existing Nowy Staw wind farm near Gdańsk. Thanks to this, the company can save part of the costs on connection or servicing .The company also has extensive experience in Poland (eight wind farms with a total capacity of over 240 MW) and worldwide  (4 GW in offshore and onshore). Innogy Renewables also has access to relatively cheap capital. 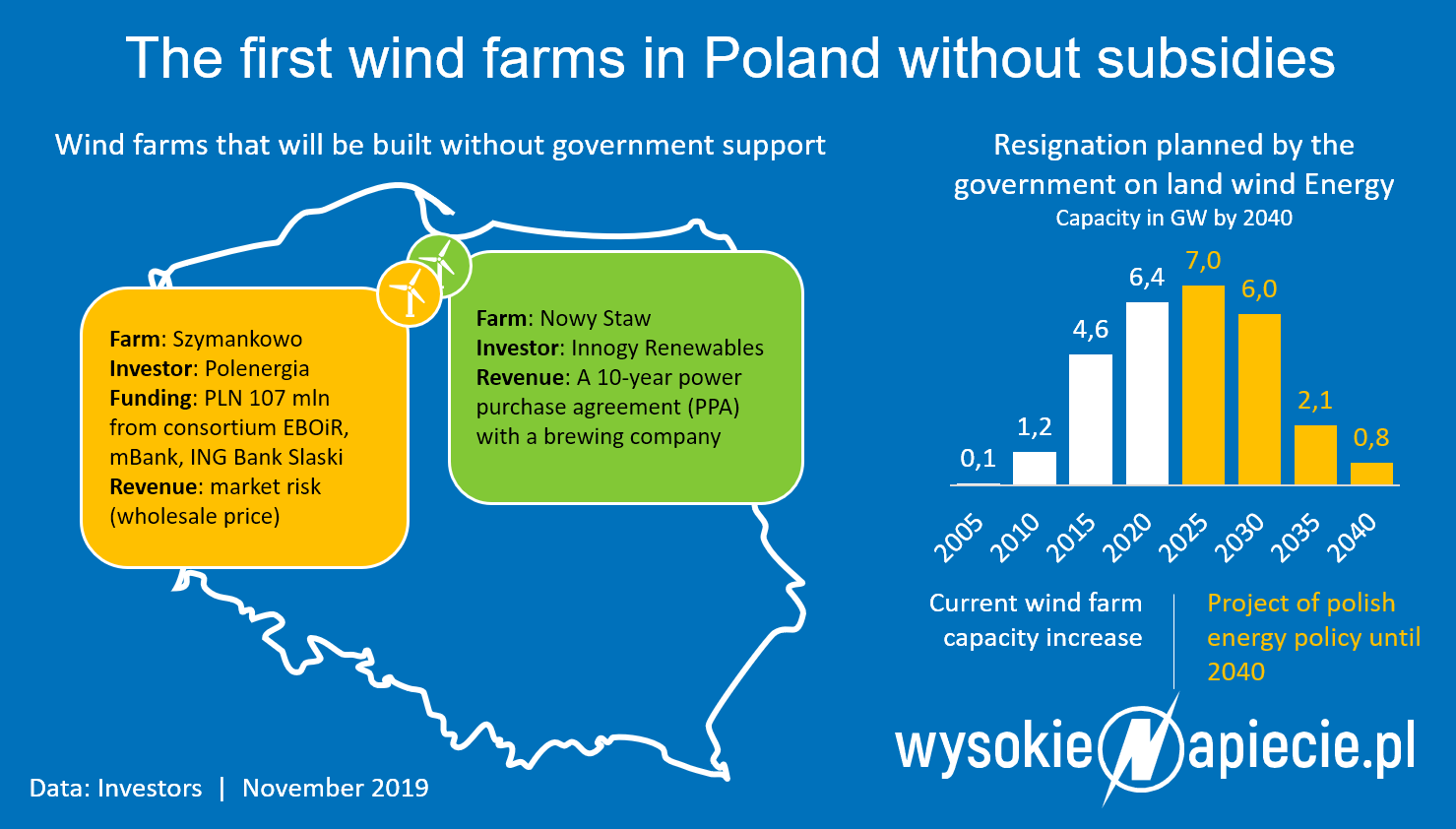 At the same time, the company managed to find a global partner, which is Japanese Asahi - the owner of Polish breweries – that for many years has been implementing a strategy to reduce its impact on the environment. By 2030, the company wants to reduce CO2 emissions from all its factories by 30 percent, and eliminate it completely to the mid-year. In accordance with the UN Paris Agreement.

Lawyers and experts involved in negotiating similar long-term contracts for the purchase of "green" energy (so-called PPAs) emphasize that nowadays , almost exclusively  foreign corporations are interested in signing them in Poland. Furthermore,  first contract of this type - signed a year ago for energy supplies from an existing wind farm in Lower Silesia - was concluded by a foreign corporation (Daimler for its car engine factory in Jawor).

The Szymankowo wind farm (located between Tczew and Malbork), which construction was announced by Polenergia, will be based on one of the largest wind turbines currently built on land - with 3.4 MW capacity each, supplied by Siemens Gamesa. These types of machines tend to produce much more energy than turbines usually placed in Poland with a capacity of 2-2.5 MW.

The company's announcement shows that the efficiency will be approx. 36 percent.

Apparently, it will be the cheapest power plant in Poland created in recent decades. Considering the total cost of energy production (LCOE), neither coal, gas, nuclear power plants, nor solar or hydropower plants can not beat this.

It is built without any subsidies, based on the project finance formula, which divides the risk between financing institutions and the investor, would not be possible without the huge trust of the consortium of three banks: EBRD, mBank and ING Bank Śląski to Polenergia. By 2037, the company had received PLN 107 million of loan for this investment by proving that the company has the knowledge and experience to do it. Today, Polenergia is one of the most experienced wind investors in Poland. Its wind farms regularly have productivity a few percentage points higher than the national average, which is still quite good compared to Europe.

Signing a contract for the construction of a wind farm exposed entirely to market risk (electricity will simply sell at market prices) shows one more thing - the banks are convinced that the times of cheap electricity on the Polish stock exchange have already passed and they are not afraid to finance such projects even without subsidies .

New farms without the support will appear ... after the settlement of support auction ?

So if an investor is able to produce energy relatively cheaply and is convinced that electricity prices on the market will be high, then it does not pay him to sign contracts with the government. This is the case here. Polenergia, announces that will take part in the renewable energy auction "if it allows maximizing the profitability of the project". In practice, this may mean that, will take part in the auction, but will bid around the highest possible rate (for wind farms the price is 285 PLN / MWh) and if it loses, it will carry out the investment without a differential contract, and if it wins, it will provide stable and high revenues for 15 years

The fact on how low electricity costs in wind farms can be today is shown by last year's RES auction. Although the maximum price that wind investors could bid was 350 PLN / MWh, those who offered the government power supplies from windmills at prices from 157 to 216 PLN / MWh won the auction. For comparison, the average monthly market price of electricity was then over 250 PLN / MWh, and last month it still exceeded 220 PLN / MWh.

Since then, more investors and especially banks, have started to believe that such high electricity prices on the Polish wholesale market is not a one-time jump, but a trend that can persist for years. As a result, they are already able to spend money on investment even without waiting for government support. It is therefore very possible that after this year's auction for large wind farms, scheduled for December 5th , we will face another flow of information from investors who bid high on it, and after any loss they will carry out the investment anyway, but based on full market risk or a long-term contract with the energy recipient.

However, the biggest limitation in this case will be expiring building permit, which investors will no longer be able to extend due to the so-called anti-windmill law, in fact prohibiting the construction of any larger (more modern) wind turbines in Poland

The first two wind farms in Poland emerging without having relay on government subsidies will be launched a few months after a new component appears in the energy accounts of October next year - the power charge. The vast majority of this fee will cover the costs of maintaining old and building new coal power plants. The Ostrołęka Power Plant itself will receive PLN 2.7 billion in subsidies added to electricity bills for 15 years. The fee rate, estimated at approx. PLN 7 gross per month for an average household, will most likely be much higher, because in the case of the power market, unlike in RES auctions, the bid rates are much higher than expected by the government.

As a result, the closing argument of supporters of maintaining and developing coal-fired power plants is that they are the cheapest source of energy, which in addition does not benefit from support, and expensive renewable energy must be constantly subsidized and the end of this subsidy cannot be seen, goes down to the history. In a moment, environmentalists will be able to show electricity bills with power rates and examples of "green" power plants that were built without subsidies.