Electricity production in Poland lowest in a decade. The smallest share of coal in history

Bartłomiej Derski
31.01.2020
Lubię to
In 2019, the share of coal in the Polish energy mix fell to the lowest level in history. However, it still belongs to the highest in the world. The place of "black gold" is filled mainly with import and of electricity generated from gas and renewable sources. And all this with a decrease in demand and production.

Polish consumers used 169.4 TWh of electricity in 2019 – by almost 1 percent less than in record-breaking 2018. On the other hand, national production of electricity dropped much more, by almost 4 percent. The 158.8 TWh generated by Polish power plants was the weakest result in this decade – this results from the preliminary data of Polish TSO (PSE) analyzed by WysokieNapiecie.pl.

The gap between production and demand was supplemented by a record-high, above 10.6 TWh, import of electricity from our neighbours and from Sweden (where we imported the most electricity with submarine cable – 2.9 TWh) and bigger production of energy from natural gas (by 2.5 TWh) and renewable sources (by 2.6 TWh).

The lowest share of coal in electricity production in history

Declining demand, much bigger imports and growing competition from other fuels  hit hardest the fossil-fuel power plants. Coal-fired power plants supplied to the system  5 percent less energy than a year ago, and those fired with lignite by up to 15 percent. less than in 2018. 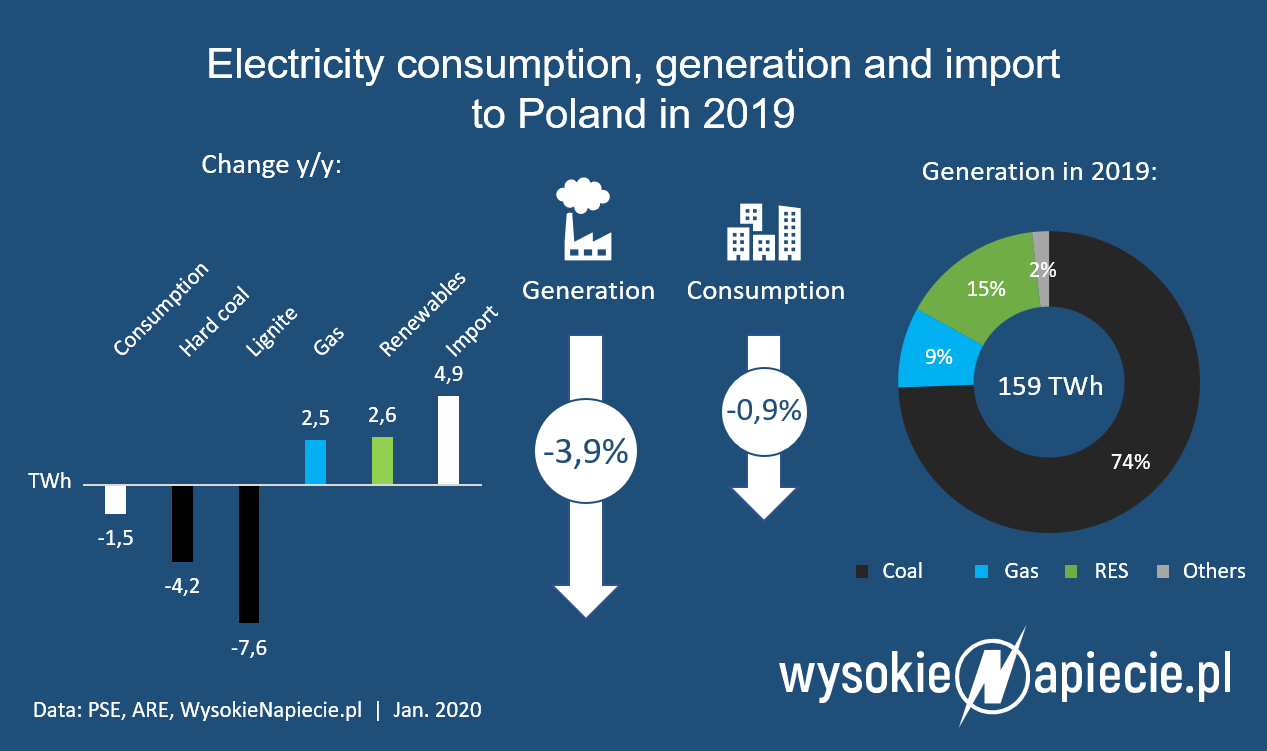 As a result, the share of electricity generated in 2019 from coal fell in Poland – according to estimates by WysokieNapiecie.pl, based on data from PSE and the Energy Market Agency – to 74 percent. and was the lowest in the history of our country.

See also: Analysis of the special legislative act for the offshore winds farms in Poland

The least brown coal electricity since 1985

In 2019, the  load  factor of brown coal-based power plants was only 53 percent. and was as much as 10 percentage points lower than the average of the last 10 years. In turn, energy production from this fuel (41.5 TWh) was the lowest since 1985, when the Bełchatów Power Plant was still being built. What contributed to this situation was the rising labour costs of brown coal-fired power plants the lowest calorific value of raw material supplied to power plants for years (below 7.9 MJ / kg) and expensive carbon dioxide emission allowances. When producing 1 MWh of electricity from lignite, the power plant must transfer to the state budget – in the form of purchase of CO2 emission allowances – the equivalent of about PLN 120, which doubles its costs. 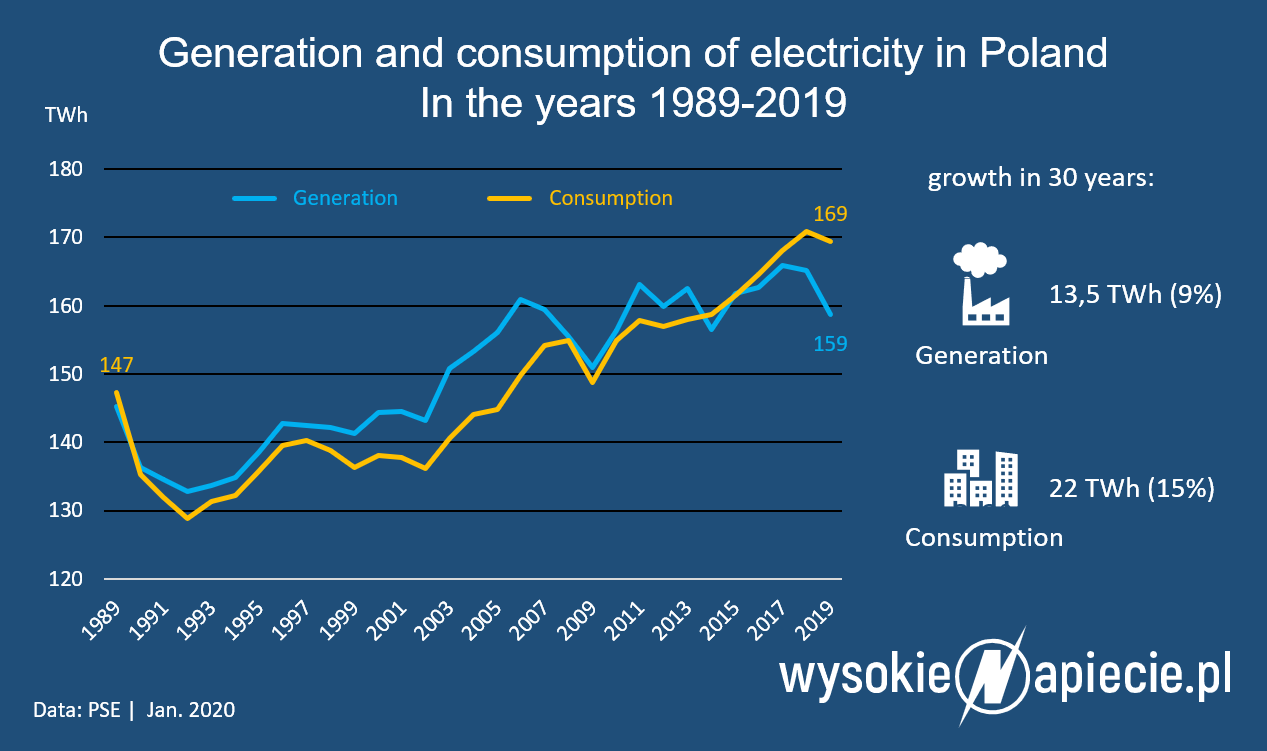 As a result, the Polish wholesale electricity market, is one of the most expensive in Europe, and domestic energy producers are losing competition with energy coming from countries with a larger share of nuclear power plants and renewable sources

This year, national coal production may also decrease. The price difference between the Polish wholesale market and all our neighbours is even higher than a year ago. In the upcoming months, more power plants that have won auctions for renewable energy sources should also be commissioned. There are more and more distributed photovoltaic sources. At the same time, new coal blocks in Opole and Jaworzno will only replace old and renovated units.

According to  project of the draft of Polish Energy Policy 2040 (public consultations are ending today), the share of coal in electricity production in Poland in 10 years is to reach to 60 percent. (compared to 74% in 2019).

26.11.2018 • Bartłomiej Derski
Polish government: wind turbines will be scrapped within 17 years
26.02.2021 • Magdalena Skłodowska
Pompy ciepła trafiają pod polskie strzechy
02.05.2020 • Bartłomiej Derski
Coal production in Poland closer to the end than claimed by politicians
31.01.2020 • Bartłomiej Derski
Electricity production in Poland lowest in a decade. The smallest share of coal in history
Jakub Dąbrowski
20.01.2020
Lubię to
On 15 January 2020, the Polish Government published the draft Promotion of the Electricity Generation in the Offshore Wind Farms Act (the “Draft Act”). Adoption of legislation dedicated to offshore wind farms is crucial for development of the energy sector in Poland, which is in the process of difficult but essential transformation from the coal-based to RES-based system. The Government expects the energy from the offshore wind farms to play key a role in that transformation.
Lubię to

26.11.2018 • Bartłomiej Derski
Polish government: wind turbines will be scrapped within 17 years
26.02.2021 • Magdalena Skłodowska
Pompy ciepła trafiają pod polskie strzechy
02.05.2020 • Bartłomiej Derski
Coal production in Poland closer to the end than claimed by politicians
31.01.2020 • Bartłomiej Derski
Electricity production in Poland lowest in a decade. The smallest share of coal in history
WysokieNapiecie.pl
25.03.2019
Lubię to
On 28 February 2019, the Minister of Energy presented draft amendments to the Renewable Energy Sources Act dated 20 February 2015 (the “RES Act”), proposing new regulations aiming to reach 15% of the RES energy in the total amount of energy consumed in 2020 (the “Draft Act”).
Lubię to